<Back to News
Congratulations to the Graduates of the Class of 2017! 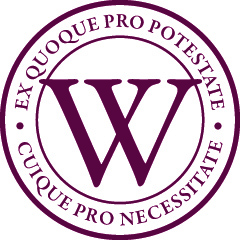 Wooster School held its Commencement Exercises on Friday, June 9, 2017 to celebrate the graduation of the Class of 2017. These seniors join more than 3,000 alumni who have graduated since Wooster's founding in 1926.

The ceremony featured a number of speakers, and the awarding of prizes and diplomas. President of the Wooster School Board of Trustees, Leon Weaver offered kind words to Wooster's soon-to-be graduates. "I bring greetings and warm congratulations, and recognition of all your hard work and success."

Head of School Matt Byrnes presented the H. Korb Eynon Award, for enduring commitment and service to Wooster School, to Charlotte Wood, Assistant to the Head of School.

Last but not least, before the seniors received their diplomas, Head of School Matt Byrnes spoke to the graduating class. "Embrace the richness and strangeness of what it means to be human. All of these things make life the complex 'wave of happenings' that sweeps us along every day," Byrnes remarked. He added, "Every day, enjoy the mystery and beauty of the world, the reality of your wave of happenings -- but keep looking to the unknown where your heart is leading. Try, in some small or large way -- to do something for humanity. While never forgetting to live happily on the edge of what you know, with the people who make you real. You have everything that you need."

Congratulations to the Great Class of 2017 for all of their accomplishments!

Class of 2017 Awards and Prizes

Cordelia Manning Award for Service to the Arts - Will Santella