<Back to News
From the Archives: Interview with Rick Fernandes, '76

As the WiNK Archives team, we were recently able to have virtual interview with Mr. Rick Fernandes. We felt that with Homecoming this weekend, this was the perfect time to do something with our new turf field, especially since the person who donated it was an alumni of Wooster. We started off our interview by thanking Mr. Fernandes for our beautiful new field.

Mr. Fernandes attended Wooster from 9th grade-12th grade and graduated 1976. He came to Wooster on almost a full scholarship. His parents, Alice and Fernando, worked hard to send him to a good school, which is why it was important to him to name the field after them to recognize his parents for everything they did for him growing up.

Mr. Fernandes said in his interview, "the four years I spent at Wooster set me up for the rest of my life." We are sure most Wooster students can feel the same way as Mr. Fernandes does about our school.

When coming up with questions we were curious on where the idea for a new field came from. We decided on asking what inspired him to make the donation. He answered by telling us that his son, who also went to Wooster, was an avid lacrosse player. Wooster athletics also played a role in Mr. Fernandes' high school career. He told us "I wasn't very good at sports but I loved being on a team." Mr. Fernandes felt that Wooster has always been a little behind in facilities, including sports facilities. Mr. Fernandes talked with Mr. Byrnes about his donation, he knew he wanted to donate a turf field.

A favorite memory from Mr. Fernandes' time at Wooster was his senior year when Wooster got its very first Computer Science department computer. He was taught how to program it, and, as the Day Student Prefect (since Wooster was a boarding school at the time), he decided to program a jobs list so he didn't have to think about assigning his workers jobs. He wrote the program and then ran it 20 times during the year to change up the positions. This experience actually set him up to become an engineering major at Princeton University. Mr. Fernandes also told us about a few of his favorite teachers, and many of us now recognize some of their names, thanks to the buildings that are named for them: Coach Warner, who was also his math teacher, and Mr. Grover, his English teacher "who taught me how to write." He also mentioned his football coaches and teachers, Mr. Costello and Beldin, and Mr. and Mrs. Eynon - he was the head of school and she was a faculty member.

Mr. Fernandes ended us off on some words of wisdom by telling us to take advantage of what Wooster has to offer. He told us the story about his son, who graduated in 2012. When he was in middle school at Wooster really wanted a MS lacrosse team. Mr. Fernandes told his son that if he wanted the team, to go ahead and set it up. His son got together with some of his other friends that wanted to play and talked to the athletic director and he helped them get a team. "It was so important that he took that situation into his own hands, and got a result," he said. He added that his son still talks about that to this day. Mr. Fernandes encouraged us to do the same because it goes farther than Wooster. "You can have an impact on your own life," he added.

On behalf of all Wooster students, we want to thank Mr. Fernandes so much not only for our field (thank you!), but also for taking the time to talk with us about his experience at Wooster. 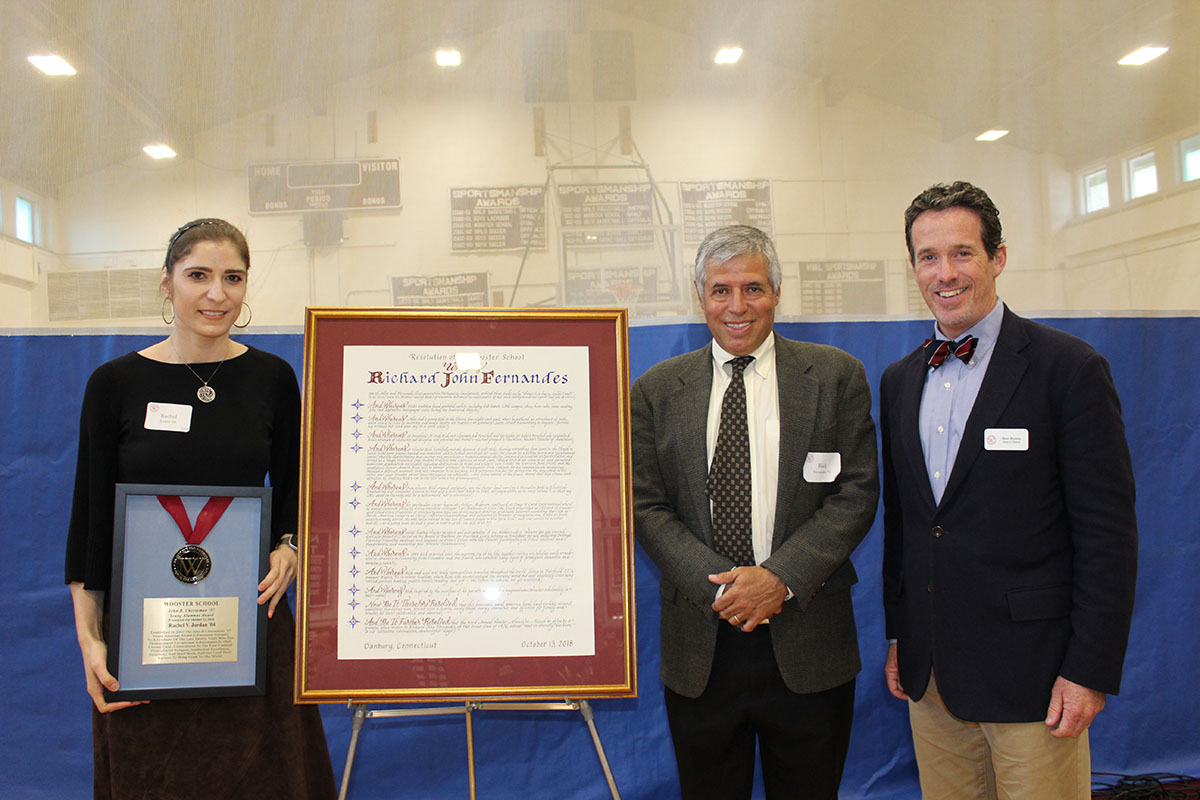 Photo of Mr. Fernandes receiving his Alumni Award in 2018